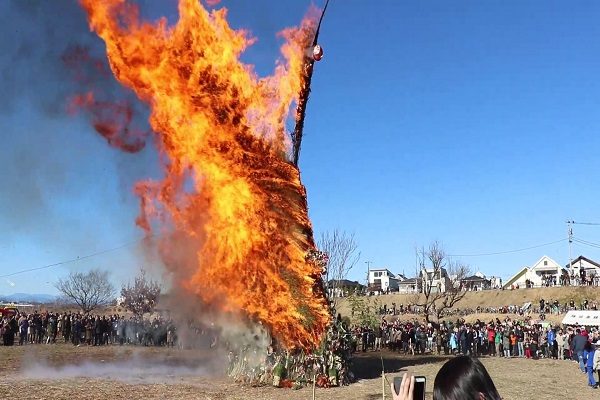 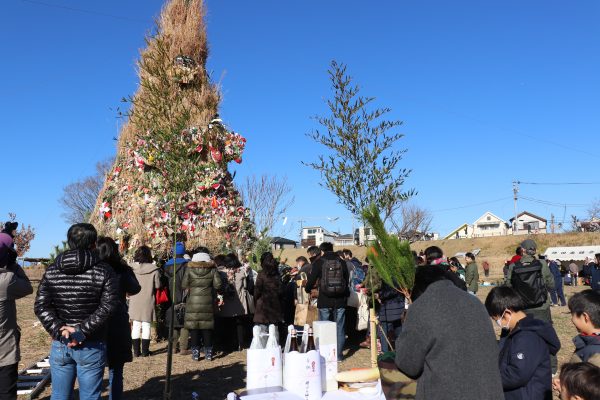 Dondo-Yaki(どんど焼き) is Japanese traditional event held all over Japan. The Japanese custom holds to see Toshigami-sama (God celebrated at the beginning of New Year) off by burnning New Year’s decorations such as Kadomatsu (Decorative pine branches) and Shimekazari (Straw rope) after pile up a tower by those decorations with green bamboo, straw, Japanese cedar and reeds.
The video below shows Dondo Yaki held at riverbed of Tamagawa!!

Mainly, Dondo Yaki is known as a folklore event to pray for the bountiful harvest for a year. In addition to praying bountiful farvest, there are some traditions for Dondo Yaki such as being able to be healthy for a year if people hit smoke or eat baked dumpling of Dondo Yaki, also people would not be sick in the year if people bring back ash of decoration and scatter it around house.

There is one more interesting tradition that the higher flame makes a person improve handwriting skill if Failed New Year’s Calligraphy paper was burnt at the event.

Please be sure regional way if you would like to bring Dharuma!! 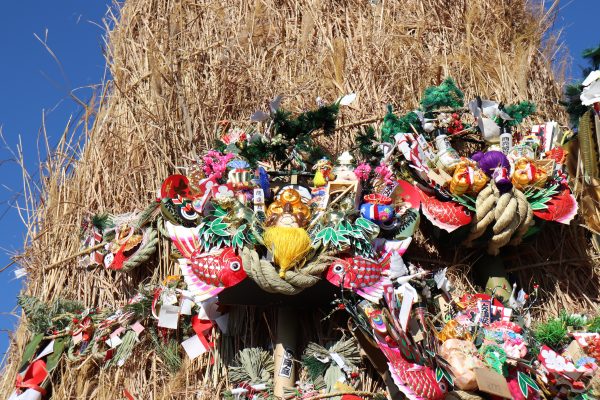 How to call?
Dondo Yaki has different way to call by region even as it in Japan. For instance, it is called “Saito Yaki” in specific region of Shizuoka prefecture, and at other region, it is called “Tondo”, “Dondara Yaki”, “Onbe Yaki”, “Hokkengyo”, “Hozyori”, “Sai-no-Kamiyaki” and “Sagicho”. 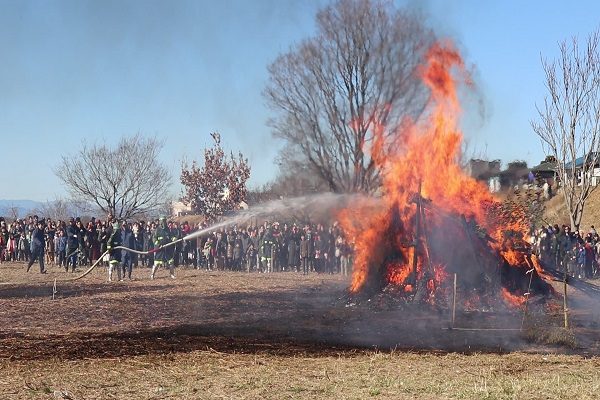 History
Described above, Dondo Yaki is called as Sagicho(左義長) and this is related to the origin of Dondo Yaki according to historical rumors. It is said that Sagicho, an event held at east garden of Seiryoden of imperial court in Heian period(794-1185).
People build a tower by bundle of green bamboo with three mallet, and attach folding fun and peper strip written wishes. Then burning it with chant by Onmyoji(Japanese lod sorcerer) to exorcise evil spirits.

Currently, fire is known as purifing the impurity and creates a new life.
The burst sound of bamboo rejects the misfortune, and the god of last new year returns to heaven on high smoke of Dondo Yaki.
Therefore, Dondo Yaki takes on role of exorcism and also bringing peope back to real world from relaxing time of New Year days.

Recommandation
There are many places that the Dondo Yaki was conducted in Japan but the size of a tower and fire are completely different by the place.
We recommend to visit Futagotamagawa-ryokuchi-Athletic-Field. The burning tower is very tall and visitors are able to feel the heat of Dondo Yaki!!

The event has been conducted every year from 1989 and offers rice cake and Amazake which is Japanese sweet Saki made from fermented rice.